People say such stupid and asinine things when they don’t know you. Like, “I hope you find peace and happiness, Rebecca.” This was said to me recently in response to a comment to a blog post (not mine) that really shouldn’t have happened. By someone who doesn’t know me at all, but thought they had something wise to contribute.


In 1998 the amazing Akita dog I raised, from the time he was five and a half weeks, died. He was not quite 12 years old. Truthfully, he was euthanized. I made that decision. He was riddled with cancer. He was with me in Vancouver, BC at the time. He collapsed one day, after a lifetime of perfect health. I received a phone call at work from my then girlfriend’s roommate. I rushed home, reassured him, took care of him. I called my vet in Winnipeg that evening for a referral. When I took him to the new vet, a very caring and thoughtful man, x-rays revealed numerous tumours. Nothing could be done. Two weeks later, on a sunny Saturday morning, I asked Cutter if he would like to go for a car ride. He said, “Yes, please.” He’d always loved car rides.


I fell apart when Cutter died. Completely. I’d never experienced that kind of loss. I cried for days, months, years. I still have his ashes in an urn, and I still do not know what to do with them. It’s not that I’m holding onto them, him. It’s that I still haven’t found the perfect place. The perfect place still seems to be with me.


As an adult, I missed a lot of things with my dad. As he aged, I often wasn’t there. I moved around a lot. A LOT. I was rarely in Manitoba, and when I was, I was rarely with him. The latter part of that statement had everything to do with his wife. Who supposedly was my mother, but of course I don’t call her that anymore, nor view her as such, having disowned her many years ago (for anyone who is reading this and doesn’t know, I was adopted, and that’s a whole other story).


The thing was, I came to understand that the choice was not wholly mine, to be apart. When I did choose to visit him, it was understood I was only visiting him. I was cordial to her, but I really was only there for him. That was understood, by all parties. But his choice not to visit me, when he surely could have, I came to understand as well. We all make choices. And if you love someone (and I’m sure he loved her), you choose to be with who you love. He chose her, to be with her, and not with me, and as an adult, I came to accept that. And over the years, I’ve analyzed this, and come to understand that this did not hurt as much as some might think. But for many years I did not look at it analytically. I just accepted it.


Just before he died last year, I visited him in the hospital. One of those weird, uncomfortable family gatherings (and we have a big family, and it was a small hospital room), which I’d never thought to be a part of. I detested it. He could barely speak, but he was cognizant. He smiled so very brightly at my appearance, he was so happy to see me. I hadn’t seen him in a year. But he was still my dad. Still the man I’d always respected, perhaps not known as well as I’d wished to, but someone I’d gotten to know very well in the relatively short time I’d had with him. The next morning he asked, as well as he was able, to go home. The doctor present referred to my dad as, “Dad.” I despised the doctor for this, was hugely offended and told that doctor off. As I recall, that didn’t go over so well.


I didn’t fall apart at my dad’s death. I had decided after the death of my dog, whom I had raised from a wee pup, that since I had a choice, I would choose to distance myself from my father’s death. Because I had the choice. And because I didn’t want to fall apart. Because I was quite certain that my father’s death would undo me. I did not want to become undone. So I worked it out. To not spend as much time with him as I maybe could have (and a lot of that had to do with his wife, whom I could not abide). It was deliberate. It took years.


I made a choice.


If you ask anyone who (really) knows me, you will know that I chose wisely.


Do I regret it? Honestly, no.


I miss him. So very much. He was a very wonderful man, a restless man (which may account for why I was so restless for so very long), not a big man, but you never noticed that because he came across as so large. And the time that I spent with him mattered. We often had the most amazing conversations. I miss those conversations. We had things in common. We both wrote. And thought. And those things matter more, than that I didn’t spend as much time with him as I could have (I refuse to say should have).


So to have someone say something superficial and asinine like, “I hope you find peace and happiness, Rebecca,” because I actually chose to address their comments, in their blog, makes me realize that some people like to toss off such phrases because they simply like to talk, to get in the last word, to simply hear or see (in this internet age) themselves speak. In my world, if you have something worthy of saying, you say it. Like my dad did. If you have nothing worth saying, don’t say anything at all. You’re much better off that way. 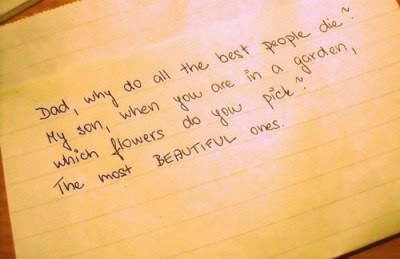 Everyone is much better off that way.