She’s a shocking puppy. She always has been.


At four and a half months of age, she is just now settling down enough that her promise shines through more clearly. But from the time she was 6 1/2 weeks old, when we brought her home, until now, she has been, at times, quite wild, very willful, dominant, challenging, foolishly playful, yet so attentive it’s startling. She’s unlike any puppy I have ever raised.


I’ve raised German Shepherds and Akitas. I’ve adopted a Border Collie/Sheltie cross from the Winnipeg Humane Society. All of my dogs have been intelligent, singular, single-minded, but basically biddable (yes, I know, an Akita, biddable? But mine were, trust me).


I read extensively when I decided to raise a puppy back in 1985, and discounted most. I’ve based my training methods largely on published works I’ve read by Rutherford and Neil (How To Raise A Puppy You Can Live With), Dr. Ian Dunbar (I once attended a workshop of his), and the Monks of New Skete (The Art of Raising a Puppy, How to be your dogs best friend). A few years ago I thought Cesar Milan had worth, but have since revised my opinion. I’ve read L. David Mech’s books on wolf behaviour, and based a lot of my training methods on wolf behaviour, as a result of his research. There were (and are) many books published by so-called trainers and behaviourists that I perused and discounted over the years. It takes a lot to convince me, in all things, but most certainly when it comes to dogs.


She does this thing, when she’s listening and learning: she cocks her head at a certain angle, and her ears, which have yet to decide if they will actually stand up or always be at half-mast, are most expressive. I will say, “Sam? Be ready. Pay attention now.” And she does. She cocks her head, usually to the right, and her ears will lift, yet pull back, her body tenses…but it’s her eyes…


She has the most beautiful eyes. Because she’s a red, her eyes are almost golden. And she has the most intense gaze. When she wants something, or she’s learning, her eyes burn into mine intently, as if she is trying to focus her want, or discern my meaning, my words, my next move.


When she was 8 to 12 weeks old, she was very impatient, and her impatience came through most often when we would ask something of her she did not want to do…like sit, or down, or don’t bite, or…whatever she was doing that was unacceptable. She would look at me and stamp her right paw. Hard. I’d never seen a puppy do that before. She would stamp her paw and then “woof”…and I would be hard-pressed not to laugh, because I was so astonished, and I would say, “No, Sam, enough,” and then ask again whatever it was I’d been in the process of asking (my training is always in the form of a request, not a command).


She still “woofs”. She has a wide range of vocalizations, most of which are very soft. Most of which, since she is usually not far from us, she makes sure she comes close to deliver. With her intent golden gaze.


I’ve never raised a Border Collie. I’ve always thought of them, always thought I could, or would, or might. I read a book this past Christmas by Donald McCaig, “Eminent Dogs, Dangerous Men,” and there was a quote about tails: Foolish tail, foolish dog. Sam has a foolish tail. This made me laugh and laugh. I sometimes think Sam is a very foolish dog.


But Sam, as I’ve said, is like no other puppy I have ever raised. Out of a litter of three, we chose her because she was brave. Her sister, another red, was very shy and retiring, and was not so flashily marked. Her brother was black and white, and we did not want a male. Sam was very bold and very friendly, and very flashy, and even though it was over 100 degrees F, she kept bunny-hopping up to us. And so, of course, we chose her.


She likes to rampage through the house, when we decide to free her from the kitchen where she was confined until she had gotten the hang of house-training (this took longer than expected, but she’s fool-proof now). She likes to think she can jump and run like a big dog, but she lacks the co-ordination and doesn’t care. She loves people. Other dogs scare her, big or small, and she barks at them. She now knows what she should do, but will look at us, with that head cock, and do the opposite of what we ask her to. We tend to laugh and bluster.


Sam was her Christmas present. Not mine. But she may as well have been. 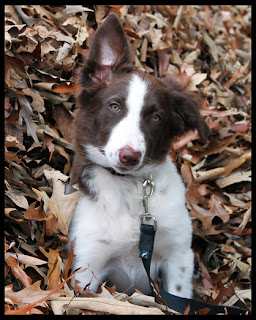