In my opinion, I think some trainers possess an attitude of, if that “misbehaving” dog were their dog, that dog would not be misbehaving at all (please note: “misbehaving” is open to interpretation. We all have our own definition of good behaviour). Dogs act out for all kinds of reasons. They are intelligent, thinking, feeling creatures. They have good days and bad days, and can experience moodiness, dissatisfaction, and general discontent, as can most creatures. It is the height of hubris to think/feel/believe that someone who loves someone else could possibly be happier with you, the onlooker. But I have known of some trainers who think this very thing. (This very mentality happens in other relationships as well; some people think they are always better for someone else than the actual main person in the picture.)

It is the job of the trainer to strive to train both the person and the dog so that they may work together to achieve a relatively harmonious state. I say relatively, because with all relationships, there will always be conflict of some sort. The idea is to understand that those conflicts will arise, and how to work through them.

There is one golden rule that I follow when first meeting a dog and client: Do not place your hands on the dog. (This is not to be confused with making eye contact, but it has the same foundation. For some reason, there has been, for many years, the belief that you must not make eye contact with dogs because they will view that as a challenge, and god help you then. In fact, if you don’t make eye contact with a dog, they will view you as submissive and not worth consideration, or worse, for the unexpecting, worth challenging. Dogs can discern a lot from what they see in your eyes. And, there’s this: if you don’t meet the eyes of the dog, how are you going to know when that look in his eyes changes from considering to challenging?)

I have known of some trainers who take a “hands on” approach. I do not respect those trainers. You do not touch a dog, unless the owner gives you leave to, and/or the dog indicates it accepts you. This goes for leash work, as well. The fact that you, the trainer can physically handle the dog lends nothing to the relationship between the dog and his person…regardless of how it may swell your ego.

Physical contact with a dog, any dog, imparts the need, or desire, for control. It violates a dog’s sense of personal space, just as it does with people. In short, it rings of challenge. A dog allowing you to touch him/her indicates a huge level of trust. People tend to take for granted that they can just reach out and touch a dog, any dog. This is due to the fact that dogs often willingly accept the touch of strangers, because many dogs are genuinely submissive (the whole “domesticity” thing). It comes across as pretty much natural to them. But many dogs are just as equally not submissive. Many dogs view touch as invasive and challenging; dogs definitely have a sense of “personal space”. If more people viewed this sort of thing the way it should be viewed, there would be far fewer problems between people and dogs.

Hank is a very sensitive dog. He’s young, just over two years. For our first two weeks, I never laid a hand on Hank. I spoke to him, made eye contact with him, played with him when he involved me, fed him, took him to and from his pen when I felt he was open to it. Yes, I petted him, stroked him, but only when he indicated he was comfortable with it, when he came to me, or dropped down at my feet. I never forced him, never forced myself on him. It was always up to him.

After the two week bonding period, I then began handling him physically (an important incident occurred, which I will share later, that changed things subtly between us).

Hank is headstrong, but not unruly. He also had some bad habits, which she realized she had brought about, due to some unfortunate circumstances, and then just letting things go on as they had. But Hank is of a biddable breed, and is highly intelligent. His self-control was easy enough to address, easy enough to instill. When I had to restrain him physically, I did so quickly, a gentle hold of the scruff or shoulders, pulling him back or just holding him in place. Each time, I told him, in a firm, level tone, “Hank, wait.” Or, “Hank, get back.” I was never overly aggressive, just firm and unwavering. If he was on the bed or the sofa, I would gently shove him off, and tell him, “Hank, off the sofa,” or “Off the bed”. But I never overwhelmed him with that physical contact. It was the voice I was more concerned with. Overwhelming a dog with touch only teaches him to avoid your touch, if he’s not open to it.

The important lesson here is that you do not have to be physical with a dog in order to teach. No more than you have to be with anyone else, when it comes to general education. If you have the right mentality, the ability to communicate, the dog will know it. And voice will suffice. If you need to get physical (and you may need to at some point), you have already established that you are in control (of yourself, at least), and that you can handle the next challenge.

Hank has been just as easy to teach as any dog I have worked with. His number one person, however, voices her impatience (with herself) and her confusion with some of Hank’s idiosyncracies (more on those later).

But, overall, I’ve been very pleased with how Hank’s education is progressing. And so is she. 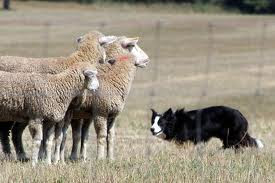