Hank’s training goes on without me currently. But I laid some very important groundwork.


She now refers to him as my dog. As in, “Your dog was very playful this morning.” Or, “Your dog jumped on the bed tonight, but I politely asked him to get off, and he did.” I softly remind her that he is not my dog, and she laughs and says, “Oh, I think he could be.” This, of course, is partially true, but only if she were not in the picture, which she so obviously is, and so it is a moot point. He will never view me as his number one person; she will always be that. All I did was provide him with a focus, introduce him to self-control, thereby boosting his sense of self, and his self-confidence.


I spent the first two weeks bonding with him; all this involved was spending time with him, playing with him, feeding him, giving him the occasional cookie, speaking softly to him, petting him gently. Upping his vocabulary was a part of this, done casually. For instance, she used to use the word “treat” when giving cookies. But I’ve always found that it’s easier to use two syllable words in certain instances, and so I used the word “cookie” when treating the dogs (before Spotty passed away, he was always the first recipient of said cookies, because he was the elder).

The next four weeks were spent teaching him a vocabulary, familiarizing him with words, and ascribing those words to actions.


Vocabulary is a huge part of training. It’s all about education. One of the biggest mistakes people make when working with dogs is to use one word that becomes the word that is supposed to mean everything, and which, in the end, comes to mean nothing, and the dog is supposed to figure out what, exactly, is required of him.


In my opinion, there are two words that are most often over-used: No, and Down. Think about it for a second: People use the word No so easily, so quickly, smoothly, and frequently, I’ve seen some joke that their dog’s name could just be No, and to hell with everything else. Then there is Down, which is used when a dog is jumping on you, on the furniture, against the door, or on your company. Oh yes, and it’s also used to get the dog to lie down, but for that, people will often say, “Lie down,” which just further confuses the issue.


The one thing I always counsel people when training them (and it really is about training the people, since training their dog is relatively easy by comparison) is this: Think about what you want your dog to do, and then ask him to do that. For example, if you want your dog to get off of something (you, the furniture, your best friend) use the word Off. If you want him to stop doing something (digging, pestering the cat, looking for crumbs on the kitchen floor, sniffing your neighbour’s groin area) use “Stop” or “Enough”. These words should be used in conjunction with the dog’s name, and, out of respect, phrased politely: “Hank, please stop.” “Hank, that’s enough.” “Hank, off, please.” Eventually, keeping vocabulary in mind, you progress to the stage where you are speaking to your dog as another intelligent being, forming sentences, and you can say something like, “Hank, stop pestering the cat, please,” “Hank, get off the bed, please,” “Hank, that’s enough sniffing,” etc.

Forming sentences furthers your dog’s education and vocabulary. Basically, it forces your dog to pay attention, to listen for those key words. Just the same as it does for people.


I don’t necessarily follow rules (because every dog is different), but one rule I adhere to strictly is that all requests are voiced politely, and, once the desired behaviour occurs, a thank-you of some sort should follow. It’s all about respect, remember. So: “Hank, stop pestering the cat. Good boy.” “Hank, get off the bed, please. Thank you.” You may think this is all a bunch of hokey crap, but believe me, once you start treating your dog with respect, your dog will respect you. And once you see the results, you will understand my point.


Something I stress as hugely important: NEVER LOSE YOUR TEMPER.

Following this is: TRY NOT TO RAISE YOUR VOICE.

Anger has no place in a dog’s world. It indicates you have lost control, and a dog will not respect you if you lose control.

By the same token, raising your voice is certainly useful at times, but as a continuous method of communication (and you might be surprised how many people do this day to day), raising your voice is another indication that you lack control, since most people raise their voice when frustrated, annoyed, upset, or angry. Keep your tone level and firm.You must always appear to be in control. If not, your dog will know, and will view you with little, or no respect.

Dogs learn by listening, and by watching. They are much more attuned to your tone and your body language, and you must be aware of this, just as they are. Raised voices and lost tempers result in fearful behaviour and/or aggression, just as it does in people.


Hank’s training, as I said, currently goes on without me, but I left a solid groundwork, and she has been able to emulate me, and is able to continue his lessons without me present. And he is, by all reports, a happier, more playful, and more self-controlled 2 year old than he was.


But make no mistake: he’s her dog. Not mine. 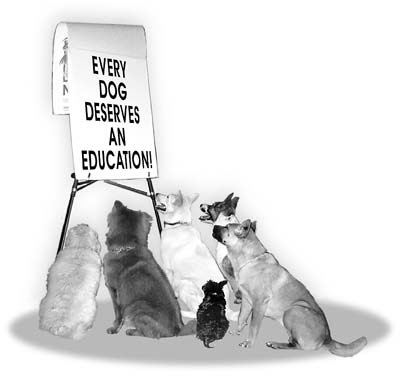