I’ve been staying with my best friend until I go back to North Carolina to my sweetie at the beginning of October. It was just easier after the house I was living in got sold out beneath my feet, and I got no money back from the guy who was my landlord who is a douchebag, but that’s not the point of this post.

My best friend has a fine puppy dog, Sophie (a recent rescue), who is one of the sweetest, most loving and loveable dogs you could ever meet. I think she’s a shepherd/husky cross. She’s white all over, with a German Shepherd build (with somewhat less angulation; in fact, she has four-square perfect conformation) but she has biscuit coloured ears and a bit of the same colour on her forehead. She is, quite simply, lovely.

I am missing my own (and my sweetie’s) puppy dogs severely. They are in North Carolina, and I’m in Winnipeg, and having a puppy dog present makes things so much more tolerable. Sophie is approximately a year, perhaps slightly more. But she’s a joy to spend time with, and I’m grateful for her company. I walk her every morning, and play with her and her tennis ball throughout the day. Sometimes she gets a walk in the evening, as well.

The other day, I thought to take her for a car ride to the other side of the city, where there is a dog park. For some reason, Winnipeg dog parks are not completely fenced in. They are expansive areas, but I knew I couldn’t let Sophie off leash, as she’s not my dog, and even though she’s obedient enough, I couldn’t take that chance. So off we went.

We went in my car. I had all the windows down (it was a very warm morning), but the windows in the back less than halfway. Sophie is basically very well behaved in the car, and sits or lies very quietly in the back seat. But once in awhile, in true doggie fashion, she likes to stand up and stick her head out the window. I had no problem with this (even though my own dogs in the past had never done this). I kept an eye on her each time we went out. So this particular trip, I wasn’t surprised to see her indulging by standing on the armrest and putting her head out the window.

We’d gotten about two miles from the house. We were going over the bridge into another part of town. It was a bit congested. I was focused on the traffic. Until I saw, in the far right of the rear view mirror, a sudden thrashing, and heard sharp whimpering coming from the back. I shot a look over my shoulder, and what I saw made absolutely no sense to me:

Sophie’s neck was trapped in the window. It had somehow closed, and she was trapped, and was now thrashing violently in the back seat and whimpering in distress.

In the split second I saw and registered this, and couldn’t figure out how it had happened, I reached for the button on my side to roll that window down. My eyes shot to her in the back seat. The window was not going down! I couldn’t figure out why not. I hit the button again, as Sophie continued to thrash and cry in panic. And then it hit me: She was standing on the window button in the back seat herself.

Now in my own panic, and in traffic on a bridge, I hit the button again, and yelled over my shoulder, “Sophie! SOPHIE!” Whether it was my yelling or a sudden shift in her own movements, the window rolled down and her neck was released and she fell into the back seat.

This encompassed all of perhaps 5 seconds.

I had now reached the end of the bridge, and I pulled into the far right lane, shaking badly, and then pulled out of traffic into a construction zone. Sophie had collapsed into the back seat, stood up, collapsed again, then simply lay down, panting. I came to a bone-jarring stop, threw the car into park, and turned back to her. She looked at me, and licked my hand as I reached back to her, asking her if she was alright. I then got out of the car and opened the rear door, reaching for her and pulling her toward me. She was very passive, but she thumped her tail and continued to lick my hands as I checked her over. She seemed fine. She even raised herself and half crawled into my lap. But I was very concerned, very worried, and so I turned the car around and drove back to the house, keeping an eye on her the entire way.

As we drove home, I watched her in the rear view mirror as she raised herself from the back seat, her nose raised to breathe in the breeze from the driver’s side windows, and shoved her nose toward the passenger window. She started to whine, and pushed her nose against the window. I was appalled.

I got her home, and watched her for an hour, and she was fine. I had been so worried, but I had promised her a trip to the park, and so I did take her, about an hour and a half a later. But I kept the windows in the back rolled up (she whined about that), the front ones down, and after the visit to the park (which she thoroughly enjoyed), I took her to McD’s and got her a cheeseburger (she apparently does not like pickles–who knew?)

I have never had to use my “lock-down button” for my windows. I’ve never even actually paid attention to it’s function. It turns out it’s a very useful function indeed. My advice to you is: USE IT. My best friend has now told me that she has used it because her kids are always playing with the windows. My dogs have never played with the windows, because they have always sat quietly in the back seat. I have obviously been fortunate in this respect.

So, word to the wise: Engage your goddamn Lock-down button for your windows. Sophie was lucky. Make sure your dog (or child) is as well. 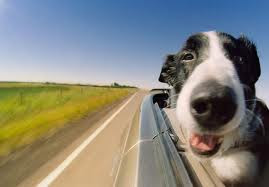