I go up to the room at the top of the house, as I often do, to have a smoke. The window there looks out onto a park where, more often than not, there are children of varying ages playing, their mothers look on, or chat with other mothers, or couples lounge, apart or together, so close together, and talk of things I cannot hear.

Today there were two boys, perhaps 4 or 5 years of age, oddly uncoordinated (was I ever that clumsy?) who are brandishing branches, as long as they are tall. There are rocks, and picnic tables, strewn about the park, and the boys stumble-run between them, smashing their branches against these mostly impervious objects. They seem very serious as they go about this, there seems to be no joy in it, just a willful determination to destroy their branch. To smash it into fragments. Unfortunately for them, the branches are much more resilient then they expect, and they don’t break easily. I watch as their frustration grows; it’s obvious in their stance, and in the way they run faster (though still clumsily) between rocks, and picnic tables. They bring the branches down again and again, harder each time. Some pieces fly off. They want more. It’s so obvious.

Why? Why this need to destroy? It’s not about the rocks. Or the tables. It’s about the branch, and their need, their almost desperate desire, to shatter what they hold. There’s no thought behind it. If you were to ask them what they’re thinking, it’s unlikely they could tell you, or certainly not coherently. The need to destroy is neither cohesive, nor coherent.

Yet here’s the thing: I have done the exact same. And there is no thought behind it. You pick up a branch, maybe carry it around for awhile, but eventually, without even thinking of it, you swing that branch against something unyielding, just to break it. There’s no other reason for doing so. You wish to break it. Even if you haven’t given it any thought. the driving force behind your action is to break that branch. It is, sad to say, satisfying, in it’s own way.

To break something, to destroy what you hold in your hands, simply because you can.

And I ask again: Why? 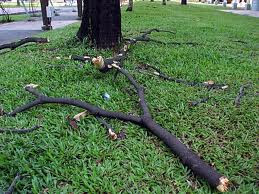