It has been months since I last blogged. Months! I’m a little shocked by how much time has actually passed since I last wrote something here. But now, here I am, to tell about all the wonderful things that have happened in the interim.

My sweetie and I were apart for three months, during the spring and early summer, and that wasn’t much fun at all. But I was still adhering to the rules, and the rules were that I couldn’t be in the U.S. for more than six months out of a year. It was tough, but we weren’t going to mess with things and thus mess up my chances of getting into the country and staying in the country. So we persevered, and sometimes we suffered, but many times we laughed as we talked about our days, and the things that went on. When two people have to be apart, for whatever reason, for a length of time, how you handle that time apart, and how you are during phone conversations (we didn’t Skype, but we did FaceTime a couple of times) says a lot about how strong your relationship is. And that’s all I’m going to say about that.

So anyway, the end of June rolled around, and finally, FINALLY, we could be together again. In Dallas! I was attending the Golden Crown Literary Society’s Conference, for their 9th annual awards conference and ceremony. My debut novel, Everything Pales in Comparison, was a finalist in two categories, Debut Novel, and Intrigue/Romance. My sweetie joined me in Dallas, and we had a very sweet reunion. Many, many women said wonderful things about my novel, and I signed many books. Sadly, my novel did not win any awards that weekend, but many other deserving books did, and it was an enjoyable time.

(Here I am signing books.) 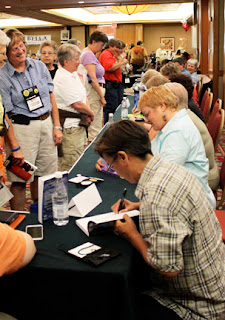 (My novel cover was poster-sized for display.) 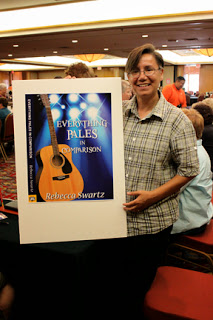 (Selfies: my sweetie and I, awards night.) 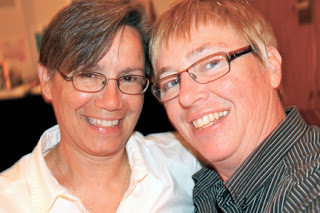 Flying back to North Carolina (home to me, by this point) via Dallas, we had an interesting little episode going through security. Or rather, I did. As my luggage was going through the x-ray machine, everything paused, while the guards looked fixedly at their screen. Finally, they pulled my suitcase, and me, off to the side, and asked me, while pointing at the object on the screen they were scrutinizing, whether I could explain what it was. For a moment, I went completely blank. And then I laughed, albeit a bit nervously.

I had been unable to find one previously in NC, so I managed to find one in Winnipeg, and packed it to bring with me.

This is what it looked like when I bought it. 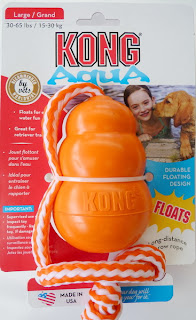 However, on the x-ray machine, neither the packaging nor the rope shows up. Only the weird shape of the Kong itself. I can see why it would raise…concern. Or eyebrows. When they opened my suitcase to actually view the object, it was clearly just a dog toy (they took it out and studied it though, just to be sure). Once it was safely stowed away again, and my sweetie and I were getting our stuff together once more, I gave a laugh and a shake of my head, saying, “Wow, I never even thought of that thing. It looked so strange on their machine, I couldn’t think for a moment what it even was. It looked like a damn butt plug!”

Behind us we heard muffled laughter, and we turned to see more guards behind us, on a raised platform behind a low shield of plexiglass, observing. The laughter had come from a (attractive) female guard, who had obviously overheard me. I really blushed at that point, my sweetie gently grabbed my arm, and we headed off to find our gate, still laughing, and laughing for quite some time afterwards.

Once back in NC, and with the relevant section of the Defense of Marriage Act (DOMA) now struck down, my sweetie and I headed to my immigration lawyer to find out what we needed to do to further our (my) application to immigrate to the U.S. Well first, hahaha, we had to get married. And so we did. It took a couple of months, and lots of planning, but we did it. In Spokane, WA. With Jill Malone officiating.

(Here we are getting married. Look how handsome we all are!) 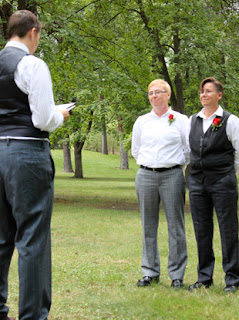 (And here we all are afterwards.) 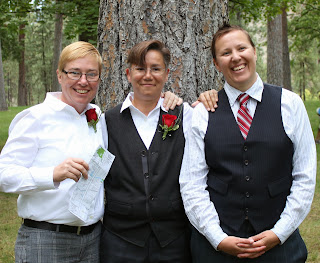 When I asked Jill to marry us, I did so because she is a writer and a poet, an author whose work I hugely enjoy, admire and respect, and who, as a person, I admire and respect. When she married us, she read a poem, a beautiful poem, which I will share some other time (it’s a bit long). And that map in my sweetie’s hand? She wrote her vows on that. Beautiful, touching words, written on a map of Spokane. Which she memorized (the words, not the map). I had to read my vows from the paper they were written on. Hers were better than mine. This is one of the reasons why I love her.

Back to NC, where we contacted the lawyer, and also planned our after-wedding party with friends in Hillsborough and the surrounding area. And then, and THEN! along came this little guy: 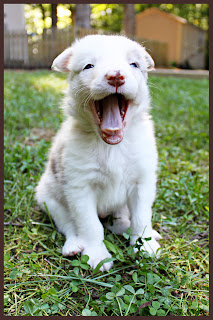 We first met Lucas when he was 5 weeks old. That’s the picture above. He wasn’t named Lucas then. He was just one of a litter of eight Border collie pups my sweetie was photographing for a local breeder. He was the runt, and he was small and adorable, and we fell in love with him instantly. But he was already spoken for. And we had no plans to add another puppy for at least another year. A couple of weeks later though, the breeder announced on her Facebook page that he had become available; the couple had had a health emergency (the man suffered a heart attack), and so they couldn’t take him. I contacted the breeder immediately, expressing our interest, spoke to my sweetie, who said yes, and out of thirty some odd people who also expressed interest, the breeder chose us to be his new guardians. My sweetie named him Lucas. And the rest is history.

Our after-wedding party was a huge success, and a lot of fun. The weather, which had threatened rain, was perfect. We had about 50 people show up. We received hugs, and well-wishes, and gifts, and gift cards. We had music, and beer, and great food, and everyone seemed to have a really good time. No one from Winnipeg came; in the only negative part of it all, some people I had known for a very long time did not even congratulate us, or send a card or gift. Sometimes I’m not really sure what to think of people. Other than that, though, I can’t say which I enjoyed more, getting married, or the party afterward!

And now it’s November. We’ve just filed our paperwork with Immigration and Homeland Security, and soon we will know whether I will be welcomed into the U.S. I have continued writing, working with the dogs, and occasionally pissing people off with my brand of truth and honesty. My sweetie is working three times as hard, and every once in awhile pisses people off herself. I love her dearly. And this life, with her, in North Carolina, with our puppies, and our friends, I love it. 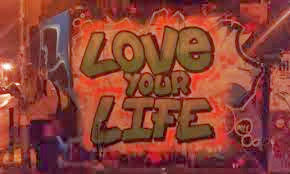