This is what happened:


I had boarded the plane from Winnipeg to Minneapolis. My seat was near the front of the plane, and when I reached it, my seatmate was already seated. He looked to be in his 40’s, roughly good-looking, and he gave me a perfunctory smile as I motioned that mine was the window seat. He stood, I took my seat, and considered asking him to switch with me. I don’t like window seats, prefer aisle seats, but when I’d booked the flight I’d forgotten to mention this, and so. He seemed rather stiff, vaguely off-putting, and so I decided not to ask to switch. I took my seat, belted up, and removed the magazine from the sleeve pouch in the seat back before me. (I absolutely need to read immediately when seated. I do not enjoy flying in the least.)


A couple of minutes later, the flight attendant came by, and my seatmate motioned to her. She bent down, and he spoke quietly in her ear. She nodded, placed a hand on his shoulder briefly, spoke quietly in return, and then moved on. In my periphery vision, I could see the fellow next to me seemed tense. And as the plane prepared for take-off, he stiffened even more in his seat, closed his eyes, and began breathing deeply.


At about this time, I buried myself in the airline magazine, trying not to pay attention to our take-off. I steadied my own breathing, and continually reminded myself to relax, while trying to focus on the words on the page in my lap.


When I fly, I’m not usually aware of the person next to me. I’m too busy trying to convince myself that what I’m doing is not completely foolhardy, and that I will survive to reach my destination. But because I was in a window seat, where I did not wish to be, and because the person next to me seemed so very tense, I was very aware of him. He kept readjusting himself, took deep breaths, reached to flip quickly through the safety manuals in the seat back, and then he started rubbing his left arm, actually massaging it, albeit almost subtly (there’s no subtle way to massage your arm, really).


As the flight approached cruising altitude, I finished with the magazine (those things are all fluff, after all) and glanced over at him. His eyes were still closed, he was still massaging his arm, and he took a deep, shuddering breath. I felt bad for grabbing the only reading material provided, since I had a novel in my knapsack I could have read, but couldn’t be bothered to dig for at the time.


“Here you go,” I said, offering the magazine.


He opened his eyes, looked sharply at me, and then the magazine. He smiled, a tense smile, but still a smile. “Thanks,” he said, taking it from me. He opened it, flipped through it quickly, and I knew he wasn’t reading it, because less than a minute later, he replaced it in the seat back pouch, readjusting himself yet again. He leaned back, dropped his chin, breathed deeply, and began massaging his arm again.


It was then that I noticed the MedicAlert bracelet on his right wrist. And I thought back to his quiet exchange with the flight attendant, wondered briefly at the need for the bracelet, and then thought, What the hell.


I leaned toward him, spoke in a low pitched voice toward his ear. “Are you okay?”


I felt a certain amount of alarm at his admission, but figured I’d started the conversation, might as well continue it. I mean, I couldn’t very well say, Well, hey, that sucks, but shut up, and let’s get through this. We had 45 minutes to go.


He took another deep breath. The conversation that followed I don’t recall verbatim. He said something about having a heart defect since birth. Said he hadn’t been able to have surgery because it hadn’t been advised, was too risky, but had finally opted for the surgery because really, what did he have to lose? And had been told afterward he had six months left to live.


I am an extremely sensitive person. I can also be brash and blunt at times. I looked up at the ceiling of the plane, and then back at him. “You have six months left to live?”


“Why are you rubbing your arm?”


He grimaced. “It hurts. That’s supposed to be a bad sign.”


I looked at the seat back before me briefly. “You’re not supposed to fly, are you?”


He grinned, sort of. “To Philadelphia. My uncle is dying. I want to see him one last time. We’re very close. I knew I wouldn’t get another chance.” He paused, sort of grinned again, then kind of laughed without really doing so. “Stupid, huh?”


“I…don’t know.” I thought carefully before saying, “If it’s what you want to do, it’s your life. You should do what you want. Are you okay, though?” I was really concerned about this, but I didn’t know what I could do, other than ask.


He confessed he didn’t know if he was or not. He was obviously discomfited, quite possibly scared, and all I could think was that he was dying, and I…wasn’t. If you get my meaning.


So what I did, what I didn’t even really think about was…I talked to him. I engaged him. I don’t know why. He just looked so scared.


I asked him questions. He was from Winnipeg. He was a denturist, formally a dentist, but he despised the field. I told him I used to be a dental assistant. Why aren’t you now, he asked. Because I despised it, I told him. Because dentists are assholes, I said. He laughed, which I appreciated.


I enjoyed his company immensely. He was honest, with his words and his emotions. And as the plane began it’s final descent, and we’d shared a silence of a few minutes, I looked over at him and asked, “How’s your arm?”


And he smiled, a genuine smile this time, and as he touched it, he said, “It’s better. Much better.” And then his smile broadened. “Thank you.”


When the plane touched down in Minneapolis and we taxied in, I looked at him and offered him my hand. “Thank you,” I said, “you have been excellent company. I’ve enjoyed our time together.”


I wished him good luck. He did the same in return.


I do not know if I will ever see him again. But I know that I am richer for having met him. For having met such a brave person, who made choices, difficult choices, when too few people can or do, when so many people make only the simplest of choices, and deem those difficult.


I cannot imagine being told you only have six months to live.


But, really, even if you weren’t told, sometimes, maybe, that’s all you may have. You just don’t know it. But he was brave, and honest, and I thanked him for that, as well.


Because so few people are. 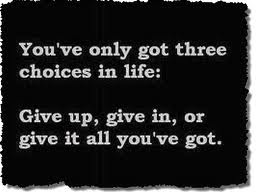