It’s been a month now.


One of the things I came here to help out with was this here puppeh (that’s how she says it sometimes: “Oh, look at the handsome puppeh. Come here, you handsome puppeh!”) 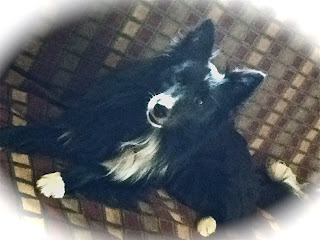 This is Hank, her two year old Border Collie/Sheltie cross.


Hank was acquired at the age of 8 weeks, when Duncan, her first dog, was being treated for lymphoma. It was certain Duncan was going to die eventually as a result of the cancer, and so she wanted to get a puppy prior to that happening. One month later, and after two years of treatment at NC State, Duncan succumbed to his illness, dying in her arms. She was very devoted to him, and his sidekick and brother, Spot, who is now 15, and failing healthwise, as well.


Hank hadn’t always been quite as shy and skittish as he is now, but the indicators were there, for sure. He was a happy, playful puppy, reserved, but not overly so. As he grew though, he became more and more shy. She would take him out, to work, on walks, to the market where she would sit and have coffee and do a crossword puzzle. People continually came up to him, since he was and is very cute, and would want to pet him. He didn’t like this, and often retreated as far away as possible. She thinks now that perhaps then she should have told people to stay away, and in fact she made a point of telling people that he was shy; but when you’re trying to socialize your puppy, you don’t tell people to stay away. Still, she sees now that perhaps it was all rather overwhelming for a puppy who didn’t really feel comfortable with people to begin with.


And so, since just before his first birthday, Hank, an already shy puppy, just became more and more so. And then, to make matters worse, her father became ill. She spent the better part of a month getting up early, going off to work, going to the hospital, then coming home late at night. She had people who could and did look in on the dogs, but none who actively engaged them, and so Hank received little stimulation, and became more skittish. He also began suffering separation anxiety. And then her dad passed away, and likely that exacerbated things further.


My job has been to evaluate Hank, and see whether he can be further socialized, so that basically he doesn’t continue to freak out when people come close. She is amazed at how he has responded to me, but I am not, though I am pleased That may sound arrogant, but this is not rocket science. I raised and trained dogs for almost 20 years. You do come to expect some things after awhile. The first week I spent here, I basically ignored him, unless he came to me, and then I would speak softly, just a couple of words. He was very reluctant at first. But by the end of that week, he was freely coming up to me, allowing me to pet him, though I couldn’t yet go up to him (if I did so, he bolted). By the end of that week, we had gotten to the point where he would wag his tail when he saw me, and would come up to me almost casually, brush against me with his nose or head, while keeping an eye on me the entire time. But the main breakthrough, at that time, was when, while playing fetch with her, he started bringing me his toy to throw. That meant far more than any one thing up til that point, believe me.


During this current six week visit, my intention was to spend the first two weeks bonding with him (I do not believe in handling someone else’s dog unless that dog and I have a rapport. I will not just take your dog from you and show you what to do with him/her. I am in the minority with that particular mindset, but I’m used to that. I have no respect for any so-called trainer who takes someone’s dog from them). The bonding period went extremely well. His training is now proceeding as planned, with some minor hitches. When I next blog on this topic, I’ll give some insights as to his progress. It’s quite fascinating.


I will leave off for now with this little note: In my experience, training dogs is not something that can or should be rushed. If you take your time, and not force yourself, if you try to understand the individual and approach them on their terms (rather than forcing them to adapt to yours, which never works anyway), you are usually guaranteed some level of success. If you approach a dog as the intelligent individual he/she is, if you show respect and consideration, you will receive it in turn.