I have a vast imagination. I admire others who do, as well. I have always been one of those people who are often lost in thought, staring out the window, or off into some distant space, when I should be doing something (supposedly) important and/or constructive. I have always been a daydreamer. I still am. My mind is a constant source of entertainment. Who needs television? I just look inward, and my god, the thoughts, the ideas, and the visuals that accompany them, are staggeringly endless, and endlessly captivating.

When I was in my late teens, early twenties, I became engrossed in fantasy novels. Not so much science fiction, though I did read a handful of those. But the technicalities of SF often caused me to lose interest. Fantasy, on the other hand, had no technicalities. Anything goes in fantasy. Dragons, elves, trolls, unicorns, wizards, magic!! Swords, and spells, and shapeshifting…now that was a world that beckoned to me, and I ran, no, pelted away from my own boring landscape to live, however briefly, amidst the charms of those worlds.

And then, for some reason I don’t recall, I stopped reading fantasy. And science fiction. I stuck with mainstream novels, about mainstream topics, and situations, and people. And then, 15 years ago, I started writing. I believe that what happened was, I knew I would never write fantasy novels (that’s not true now, I do have one in the planning stages), so it would obviously behoove me to stick with my own world, and learn the tropes and trails of writers who did the same.

Fast forward 20 years. I am once again reading, and fiercely enjoying, fantasy novels (and some SciFi), complete with dragons, and elves, and trolls, and wizards, and magic…and dragons.

A year and a half ago, I discovered Naomi Novik’s “Temeraire” series. They were recommended to me by a staff member at a local bookstore. I am including a link here, so you can read about this amazing series (that I am only halfway through; so many books, so little time, and money).

These books are amazing. They are intricately and superbly written, completely captivating and engaging, and emotionally/mentally affecting. Here are some examples of the cover art. 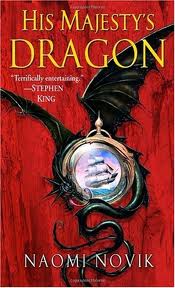 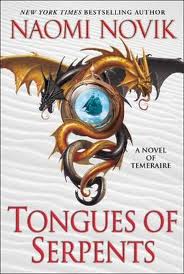 Stunning artwork. To accompany what I, personally, consider to be stunning books. Obviously, that’s just my opinion. But it’s not often I get excited, to the point of wanting to rave, about certain books and/or authors. If you know me, you know how fussy I am about the quality of the books I read.

Also, I just found out that Peter Jackson acquired the rights to this series, to develop, possibly, as a mini series. This excites me.